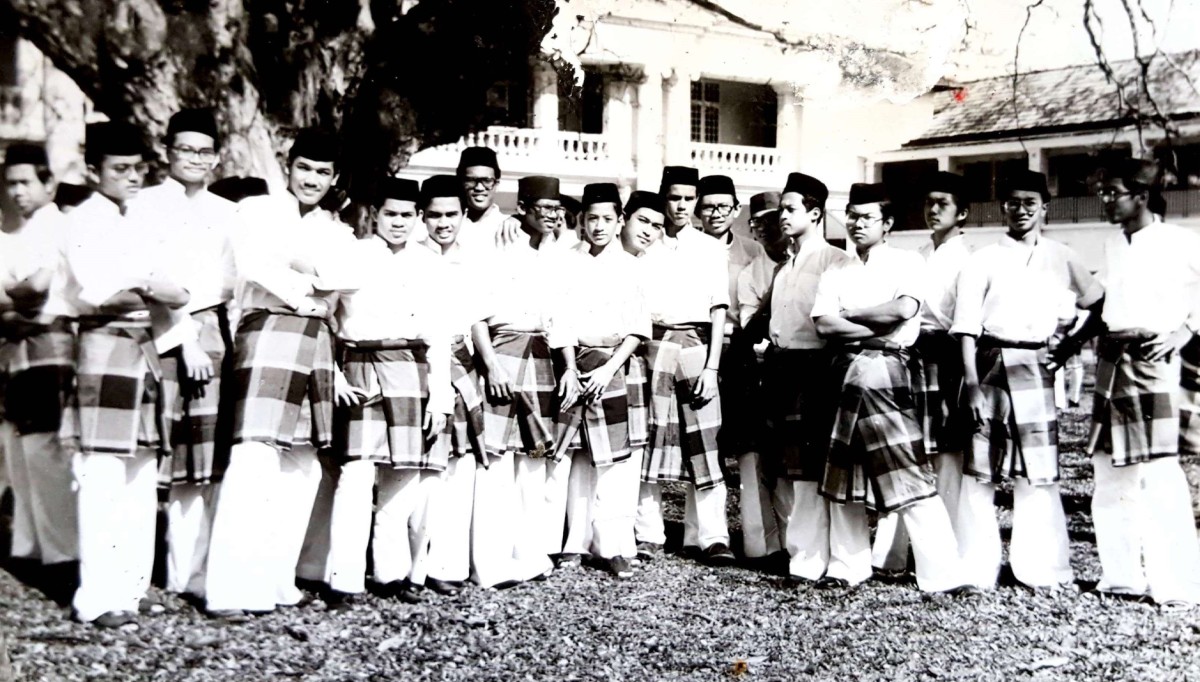 It was January 1973 when a hundred and twenty scrawny 12-year olds, from almost all points of the country, met each other for the first time.

The place : a little white building called The Prep School, nestled in one corner of the grounds of what is called The Malay College, Kuala Kangsar.

To many around the country, it is more famously known as MCKK. To us ex-students of MCKK or more affectionately termed as ‘old boys’ (yeah, I know. Its kinda corny but true in a way : boys will be boys, no matter what the age may be), its fondly remembered as ‘Koleq’.

The occasion : the first day for the new intake of the new school year of 1973. After having done with the process of registration (which was essentially not only a blur for me but also for my dad), the search was on to find the dormitory that I was assigned to and with that, the bunk with the number assigned to me on it.

Now, I know, to some, whats in a number. But for us, it was a big deal, as evidenced during the next five years. Little did we know that THAT number would play an important role in our ‘Koleq’ life. Mine was 53 and for the Form One intake of 1973, the initial E was added to the number for identification purposes, and mine was therefore E53.

Hence, for identification and administrative purposes, we were stuck with it and it proved very helpful when identifying laundry and for billing purposes, as can be attested by our ‘Laundry Master’ whom we all called Eng Dobi. Mr Eng Dobi to you, thank you very much.

By the way, ‘dobi means laundry in Malay and so, taking it from there, Eng Dobi is directly translated as Eng Laundry. Yep, life was so simple back then.

As for this little kid from Johor Bahru who grew up on a diet of Enid Blyton’s Famous Five and Secret Seven books, the whole experienced proved to be a mixture of awe and excitement, telling myself every so often, ‘so this is what a boarding school is like’.

Soon, the parents had to take their leave, leaving us kids behind. As one car after another left the grounds, with hands waving goodbye from car windows, it slowly dawned on most of us that life, as we had known it all this while, would never be the same again. Ever.

It was pretty obvious that adjustments had to be made. And fast.

To help with the transition, ‘help’ came in the form of our prefects. Some may called it ragging, some may call it induction, but essentially, it was a ‘Getting to know Koleq’ sessions and they proved to be quite a regular event. Well, for the first three months at least.

The venue was the Common Room and the sessions were so regular that we were in danger of becoming part of the furniture.

It was during these sessions that we were instructed in the use of the fork and spoon, the proper attire for different occasions, the ‘Can Do’ and ‘Can’t Do’ in Koleq aka the written and unwritten rules of Koleq life.

For instance, to be entitled to be called a ‘Budak Koleq’, we were told that we had to know how to play the school game and it ain’t football (or soccer, to the non-citizens of the former British Empire).

Instead, it was the other ball, oval in shape and one whose bounce was so unpredictable that in chasing for the ball, it can get a bit comical as it changes direction each time it hit the ground, to say the least.

Those ‘Getting-To-Know-Rugby’ sessions were brutal and unforgiving to most of us. I mean, learning how to pass the ball was pretty much ok. The ‘brutality’ starts when you had to learn how to make a tackle. Or take a tackle. Its no fun, as anyone who plays or has played rugby can tell you.

But no denying, we had fun on the playing fields. Every so often, we would exchange the oval ball for the round one, and off we all go chasing that one ball. Positional play or tactics be damned.

We had fun we had, chasing that one ball. Until one fine day, one of us tried to head the ball and the ball burst instead. It took quite a while to get the ball replaced. And truth be told, that was when we were introduced to bureaucracy : requisition forms etc etc. Duplicates minimum. And yes, I may be exaggerating a bit.

As for the guy who was held responsible for the burst ball, he got stuck with his nickname til today. It’s his badge of honour, as it turned out. Well, at least he knows how he got his nickname. Unlike some of us.

And if you think, the fun was only during the daytime, think again. We had ‘fun’ at night too. Fire drills were a blast, figuratively not literally, depending on your sense of humour. One moment, you were a ‘corpse’ and the next, you had to perform the ‘Death March’, in your pajamas. But you were never alone and I guess that’s what makes it bearable. Slightly maybe.

Another ‘fun at night’ session was when you had to go to loo in the middle of the night. As the toilets were at another part of the building which was not only old but was used by the Japanese Imperial Army during World War 2, no prizes for guessing what the ‘fun’ was. Mind you, we later gather from friends of other boarding schools, the ‘fun’ is universal. Makes for good camp fire stories, if there ever was one. Camp fire that is.

We grew close after all those sessions in the Common Room , ‘Fun At Night’ sessions and ‘Learn how to tackle’ rugby sessions. We give each other nicknames and not surprisingly, they were never flattering.

Can someone please tell me, why is it that when it comes to dishing out nicknames, they always refer to the least favourable facet of your being? To pull you back down to earth from whichever cloud your head is stuck in, maybe. And the nicknames stuck til today. To our collective chagrin.

All in all, we were in Koleq for five years. And yes, we had laughs. Great ones at that. We cried too. Why, we never knew and to analyse it was not a thing to be done. We sort of accepted it as it is and moved on.

As we had memorable moments, we also had memorable characters : DK Gupta (who told us many things but for the life of me, I can’t remember any), the Englishman PJ Dick (the only football coach I know who can work the football squad so brutally before they even touch the ball), that wizard of a winger on the football field, Ustaz Marzuki, Mr Puru (his hockey classes (yes, they were classes) were legendary, never mind his volleyball instructions), Mr Lee Sai Soo whose accuracy at launching projectiles can only be matched by the accuracy of his Maths on the ‘black’ board  (its green actually).

The tireless never-give-up mantra of Mr. Leong Chee Seng teaching Add Maths, the fashion sense of English teacher Mr Bala (after he got his first pay check and thereafter), our very own Ustaz Yusoff who never gave up on trying to pass on religious knowledge and instructions to 120 boys, and of course, En Ghazali regaling the Commerce boys on his Australian (or is it ‘Ostolian’) adventures.

That said, if only we could record the venom from the boys on the East Wing when it became known that she was no more on the ‘Available’ list, and who was responsible for that little piece of development.

Truth be told, our lives in Koleq were full of characters. From students to teachers, from seniors to the kitchen help. It’s also a well known fact that one of our support staff was an accredited FIFA referee.

To that I can proudly say that my one and only yellow card in my ‘football career’ was given by our very own FIFA referee in an Under 18 district final. That ‘honour’ was after I took out two opposing players with what I consider to be a rather well-timed tackle as they were about to launch a breakaway.

But alas, he thought otherwise. A FIFA referee. Fancy that. Not many people can say that they had been booked by a FIFA referee. And at Under 18 level at that.

Forty-seven years later, not much has changed since that fateful day when the Class of 77 (as we are now known) first came into being. Well, not much.

Our Common Room sessions are now at the nearest Mamak shop adjudged to serve the best Teh Tarik. Arguable that. The Teh Tarik, I mean. And admittedly, these sessions do not go that late anymore. It’s the discipline knocking in, you see, with curfew hours self imposed. Believe it or not.

We do fervently wish we can still play rugby when we watch the All Blacks do the Haka. Same goes for us ex-footballers. But then as they say, the heart may be willing, but the body says ‘now hold on pardner’.

School Assemblies have been replaced by gatherings, weddings (not ours, to the chagrin of some of us, but the kids’) and to a lesser degree, at funerals.

Alhamdullillah, not that many of those, so we still are able to annoy each other from time to time and regale each other with different versions of past events and as our wives have remarked, laugh at the same jokes over and over again. They do watch over us like hawks, our spouses, and who now know us better than we would have liked.

Tolerance is now the buzzword. That and patience. After all, we do support different EPL football teams, we have different political leanings and and of course, different set of opinions due to the different ways we see the world.

What would the next ten years be like? Your guess is as good as mine.

The Garden at Dato’ Jaafar’s

Kota Iskandar : The Corridors of Power

Kota Iskandar : Across The Square

The Gates of Kota Iskandar

Garden Within A Hotel (2)

Garden Within A Hotel

A Tale of Three Women : The Second Concubine

A Weekend In Ipoh

Semporna By The Sea : A Divers’ Paradise

An Evening In Kuching

The ‘Muzium Bugis’ of Pontian

Recent Posts: Politics As I See It

Covid 19 and The New World Order

Post GE14 : The ‘Shock and Awe’ Tactics in Malaysian Politics